After a small flag raising ceremony in my colony, I cycle to DB mall (Bhopal)  past the future test cricketers playing beside the slum, the tricolour, and flags of Congress and the BJP gust in fierce competition. Then the green, white  and gold balloons in the entrance.

There is nothing significant in this, other than my weekly coffee, a break from copious supplies of chai elaichi. There is nothing better thyan chai straight from street chai walla, or an out of the way dhaba. 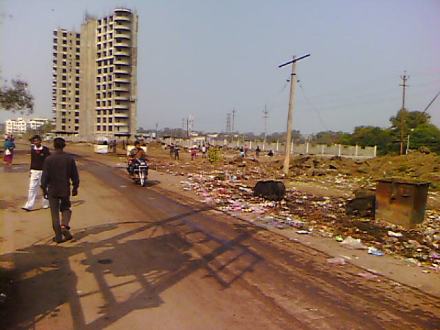 So I stop at the window of the Sharp store, the store keeper sees me.

“Main Australian huun” and pointing to the TV screen “Australian Open” and  the 5 all score line first set of the women’s final.

“Come in,  watch” but I decline the invitation and on my way to Crossword (a bookshop) I pass theCookie Man, emblazoned with an Australian chef hat.

They hope for a sale but I point instead to the hat.

“I see more Cookie Man stores in India than I do in Australia,” I say.

“Happy Australia Day to you.”

“Aaahhh” he smiles back. 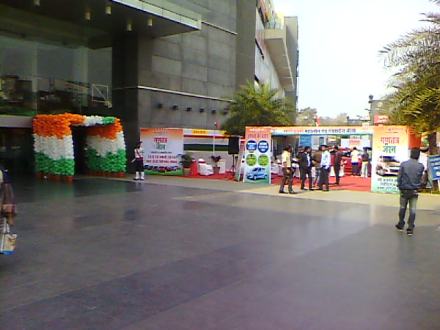 Yes, today is Republic Day  (and Australia Day). The Day 2 years and 5 months after India’s Independence that India’s 1950 Constitution was ratified. It is also the Day Arthur Philip sailed into Botany Bay with a fleet of colonists.

India at least legally gave equality regardless of religion, colour, sex or caste, when Australia still did not call Aboriginals citizens and our Negro brothers were still segregated in the USA.

Of course, discrimination remains – in all countries – even when law forbids it politicians have mastered flaming discrimination in the minds of people world over.

So, as I make my way to the top floor and Barnes Coffee and Tea Company, across from McDonalds, Mr Corn and the amoeba  games parlour with its Amoeba Dark House. . I insist on a strong coffee. They are usually good here. Some (but not all) of A lot Can Happen Over Coffee stores make it to weak for my expresso trained taste.  A week of Chai elaichi I need a strong caffeine fix.

As I wait, a big screen with SRK singing “My Home” from Veerzara was the message “Happy Independence Day”.

But why Independence Day? That’s August 15,  when Nehru uttered his famous Destiny Speech “Long years ago, we made a tryst with destiny, and now the time comes when we shall redeem our pledge, not wholly or in full measure, but very substantially. At the stroke of the midnight hour, when the world sleeps, India will awake to life and freedom.”

“Veer zara?” I ask to ensure if this is the film I saw years before in Brisbane.

“O yes” says the gent handing me my latte, as a new movie clip takes the screen. “You like Bollywood?”

There are two girls sitting across the floor, who had spoken to an older gentleman now left. They come over and introduce themselves. They were told I was from Australia.

A short haired Catholic girl named Fatimah and Akisha. Named after the shrine for Our Lady of Fatimah she admits her name helps when she goes to a Muslim hairdresser. If the hairstylist is Hindu its handy to explain her Catholic roots.

Akisha, whose name means sweet, is more traditionally styled,  explains The National Bamboo Festival is beginning at the Bhopal Haat, next door.

I explain my interest in Tribal art and she recommends Tribes India in Newmarket, apparently it is hidden and I may need directions.

Open the three days to Tuesday, I decide to check out some f the craft displays thinking a guest from Switzerland, a volunteer at an organic farm,  will enjoy it.

Displays of Indian and Chinese Bamboo, posters in praise of its eco  friendliness,  and stands from the MP State Bamboo Mission and the MP SRLM State Rural Livelihood Mission.

I decide to return on payday.  There are some wonderful trays for only 150 rupee and even working bamboo clocks.

As I leave I meet Akisha and Fatimah again who explain their role: Akisha translates  for Fatimah with the Bamboo Mission. Or was it SRLM?

Perhaps we can find some way of promoting Indian goods for the good of rural communities.

I will get back to them.