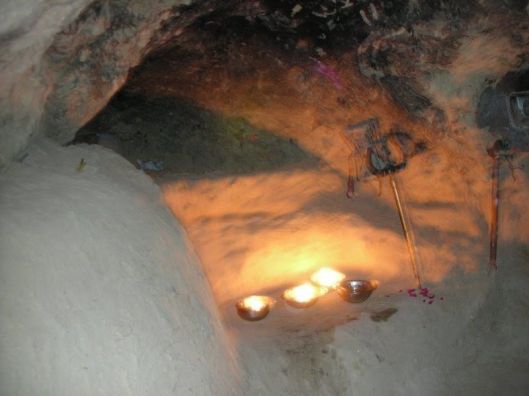 Hot, dry and headachy, the monsoon is late. In Bhopal frogs will be “married” and eunuchs will call on the gods to bring the monsoon. The patio opens to dry congested dust pasted lot, claimed by make shift homes of wanderers. The heat soon oppresses me from watching their cricketing sons. And my humour is turned to a deep belly laugh of malevolence.

My frail efforts to work, seem tangential, mind changing, almost hallucinatory. Writing poetry is becoming a prayer. If only I could be as concise and explicit as a master.

Feeling renewed peace, Advity enters and I feel the warmth of her story around me. But she is also tired, my questions answered caustically. The demands of her Aunty, widowed only days before, hem her in during the 13 days if Giri ritual.

Our hosts – family who offer us space with this unexpected tragedy – want us to see the ashram of their deceased guru. The Siddhagufa, or Divine Cave, honours the life work of the Mahayogi Yog Yogeshwar Prabhu Shri Ramlalji Maharaj. Atleast the late afternoon will cool with the sinking sun.

When I first came to India, I had never left before Australia. No matter how open I tried to be, I could only compare to what I knew. My endless questions at the contrasts drove everyone else crazy.

Then there were my preconceptions, many I knew wrong in my head, but seemed to haunt my mind: India has 330 million gods, and I’m a monotheist.

I am … and ……. (well, perhaps I don’t kno anymore). Besides, yoga is dangerous, open your mind to meditation opens you to spirit forces, demon and who knows what else.

Is the food kosher? Is touching an older persons feet worship or respect?

By the time I arrived in India I had already resolved some of these questions but at Siddhu Gufa I am again challenged by questions.

It is claimed this mahayogi freed himself from birth and death, assuming many forms in different places, Prabhuji always exits and shall exist forever an eternal being. Assuming human form at Amritsar in 1888 he settled in the village of Sawain, now within Agra, where he fulfilled the desires of his devotees who formed a cave for his uninterrupted meditation.

I sat deep within the underground meditation cave (I found out later that Maddi, a Muslim, and my non Hindu self, should not have entered, but no one seemed to mind) to think. India had already expanded my senses: her smells, tastes, touch.

At Siddha Gufa the body of Prabuji is claimed is claimed to have miraculously disappeared from the funeral pyre in full view of witnesses.

Of course, a Westerner I now of the idea of resurrection, but this is different to the idea of a deathless master. It is not unique: Yogananda was a devotee of Balaji who described as a deathless, a sort of intermediary Avatar which Yogananda said helped devotees the same as the resurrected Christian Jesus assisted in the realm beyond death.

Post Maccabean times saw increased Jewish talk of resurrection, especially of those who died sanctifying God’s name, and post the 70CE destruction of the Temple the resurrection is clarified when Rabbis sought the codify the Mishnah.

Platonists claimed the soul escaped the imprisoning body to heavenly fields of Elysian, while the Christian Pauls “babbling” about resurrection (Acts 17:18, 32).

Resurrections are claimed by Elijah and Elisha, Jesus (in the synoptic gospels, Lazarus in John) and even the first century neo-Pythagorean Apollonius of Tyna . Today, Churches proclaim a universal apocalyptic resurrection to judgement and Muslims aspire to the “Garden, where underneath rivers flow.”

Perhaps it was also the heat, or the pressure of a growing swarm of relatives at a time of the families mourning. I felt disconnected. Whereas Advity sought to reconnect with once lost family and something new to her. She seemed to touch the earth energies, the hidden dimension that weaves throughout all our personal lives. She certainly wanted to focus and returned purchasing charts of yoga poses and books of devotions.

Meanwhile, I was struggling with my own Western prejudices. While I teach tolerance, watching the children prostrate themselves in a shrine, and eating prasad, or food sanctified as an offering, led me to question what was godly, spiritual and right.

I realised I needed to open to the moment and learn.

It is claimed that on returning from Nepal in 1920, Prabhuji decided spread yoga to all of humanity. Siddha yoga transmits spiritual power that can give enlightenment for a short period. For years the yogic methods of Ashtang (Eight limbed) Yoga (Neti, Dhoti, Neoli, Vasti, Kapalbhati and Trataka) were held secret.

To conquer the ignorance of mind and intellect Prabhujis yoga centres spread the inner part of Ashtang Yoga, Dharana, Dhyan and Samadhi, parts of Raj Yoga, as the means of self realisation.

Of course, my perception of Indian thought is sometimes coloured by my Western heritage. I find myself comparing it to Kabbalah or other mystical traditions.

The idea that energies aggregate at sacred centres is not unique to India. The allegorical buildings of the allegorical stonemasons of Western Esoteric Tradition speak of non material . non-material nature emerge from the psychic essence . The Greeks spoke of a permeating fifth element . phlogiston , a volatile eather

“Its father is the Sun. Its mother is the Moon. The wind carried it in its belly. Its nurse is the Earth. This is the father of all works of wonder in the world.”

The fire of creative intent, the water like energetic flow, down into ever denser form into the consciousness of a disciple, consciously aware of the creator.

As if the hand f God reaches from the clouds, down through a window into this lower world of angels and demons, devas and djins, giving us the teeth to enliven, a hook into the lower realm of men.

As if together involuntary and evolutionary steps of Jacobs ladder, of angels descending and the souls ascent., united in a single philosophy emanating from the divine. But first the preparation, fond in seeking solutions beyond pride reintegrated community.

Mystical essence, prepared surroundings collective intellectual property, the guru?, t the existing religion on all three planes; (mental argument; astral formal aesthetic ritals; physical and emotional cod of commandments) he body of students round the master, the organization, the society of followers. Much as the three opening blessings of Hinduisms Gayatri mantra mirror three levels of existence.

At times, perhaps because of the heat, or perhaps because of the conflict with my own religious traditions, I am overwhelmed. I renewed my determination to daily kriya yoga and meditation. I needed to open to respecting the differences that at times overwhelmed me and learn how I might best non threateningly explain my viewpoint (and theirs) . Sometimes my strength of purpose can overwhelm. I needed to learn to dignify others in a way that helps new friends grow.

As foreign as these ideas are to me, I would prefer to believe the world was a conscious living entity than death that bought forth the accident of life, not just a single corrective system Gaya hypothesized by Lovelock. As I watch people rise to the rhythm of life, I wonder if instead of criticising relgion, we encourage it to reconnect us to the cycles of soul. Our feminine moon and masculine sun.