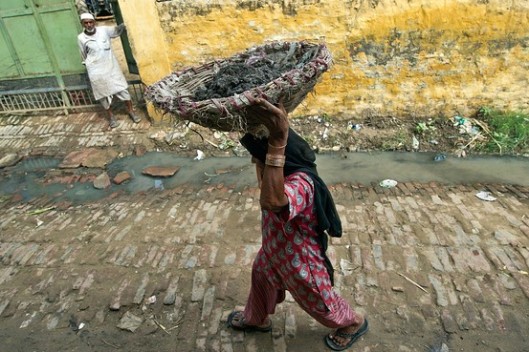 With both hands holding the basket of human excrement on her head, widowed grandmother Kela walks through a stream of sewage, up a mound of waste and then dumps the filth while cursing.

“Nobody even pays us a decent wage!” she spits as she rakes mud and rubbish over her newly deposited pile, one of several she drops in the course of her working day cleaning toilets as a “manual scavenger” in India. She and around 20 other women in the village of Nekpur, 60 kilometres from New Delhi remove the contents of toilets daily using just their hands and a plastic shovel.- AFP

In Madhya Pradesh there are 30,000 Muslim scavengers, discriminated against by their fellow believers even though Islam forbids such discrimination. I first read of it in Syeda Saiyidain Hameed’s 2012 book Beautiful Country: stories from another India.

Syeda Hameed, a member of the former Singh governments Planning Commission wrote of dry toilets been cleaned by Valmiks (Hindus) and Helas (Muslims) in Madhya Pradesh. Because scavenging pollutes even those who leave the profession are still treated as untouchable.

According to a 2011 census, there are still around 800,000 Indian households with dry latrines that have to be cleaned manually. Another government survey identified more than 11,000 manual scavengers in 12 states.  Some activists say the number is much higher, particularly if you include those who do the work for the government.

The Human Rights Watch report said people who clean such toilets in villages are often not paid cash salaries but instead paid with leftover food, grain or used clothing. Most of them earn less than $4 a month.

Of course, abuse of people in any religion is abhorrent, so I was surprised to learn it had crept into the lives  of Muslims who officially oppose it. Scavenging is unpaid work which is  convenient for villagers of for members of any religion who seek to  greedily exploiting others.

Some of my Indian friend dismissed the whole issue as exaggerated. After all, in 1997 the Madhya Pradesh government passed the Manual Scavenging Act.

However, in MP if Valmik  or Hela parents give up maila athana their children’s scholarships are rescinded, they are forced from school and some have become child labourers.  “Only if a state official testifies that a woman has been scavenging for one hundred days, does her child become eligible for scholarship” writes Hameed who alleged no officers were prepared to testify the problem still exists.

As an informant told her “It seems as if the schemes are designed to keep people in scavenging because if a woman stops, her children are no loner eligible.”

Some women have been threatened by village and family if they stop.  In one example the Mali and Thakur communities threatened a woman who wanted to stop clearing dry toilets after fifteen years. She was told “We wont allow you to collect wood, draw water, and work anywhere else.”

Since Ninety-eight percent of the MP scavengers are women, leaving the trade would risk the social exclusion and cause financial hardship for the whole family.

“There is choot-chaat (untouchability) at every step. Five hundred to seven hundred of us (Valmiki and Hela women) walk two kilometres and queue for two to four hours to get water, there are several wells in the village but we are not allowed to draw water from them. Our children are not allowed to sit with the swaran jaatis (upper castes) in school. Barbers refuse to shave our men.”

Often villagers threaten them saying “ether you clean or you will be thrown out”. A threat that has been carried out.

Many have started when young and get skin diseases. At times medical personal have refused to touch them Because bribes must be paid to  apply for positions as an Accredited Social Health Activist (ASHA), Auxiliary Nurse Midwife (ANM) or Anganwadi Worker, Valmiki and Hela women can take up positions  that could help their fellow caste members.

During a Polio campaign in Jaipur village, the drops were handed to a Valmiki girl to administer to babies because because a woman did not want contamination doing it herself.

What surprised me was that even Muslims, whose religion claims equality of all, practiced discrimination against the Muslim Hela community in some areas of Madhya Pradesh.

Syeda Hameed is a Muslim and admits “perhaps the biggest shock was to learn of a Muslim community of scavengers. We had never associated such practices with Islam. As a child. Syeda had been strictly told never to demur from drinking water at the hands of a woman who came to clean the toilets of the house.   But in MP as in some other states, caste has become part of the Muslim ethos. The Muslim scavengers here are called Hela. There are 30,000 of them in the region.”

A scavenge named Ali Hussan from Ujjain describes that “As a child, when I went to the Masjid, the maulvi sahib sent me away saying “tumhari Amma latrine saufkarti hai, tum bhaago yahan se.” (Your mother cleans toilets, you run away from here.) Not only do we have separate masjidss and madrassas , our Muslim bretheren do not even sit with us for roza Iftaar. When my eighteen year old cousin died in an accident, for three days no doctor was prepared to do a post mortem.”

Hela and Valmiki are barred from hotels, Temples and mosques. Their children take their own plates for the midday meal, cannot use the hand pumps for water, or drink from taps.   They are not allowed to wear slippers or sit in vehicles and even the Manihars (bangle sellers) refuse to place chooris on their wrists. If they do, it is when all other customers have gone, an their shirts are removed lest they be contaminated, so they can quickly wash themselves of contamination.

HRW notes there are throughout India there are laws to curb caste subjugation, but it remains wide spread.

People are coerced to collect human excrement on a daily basis, carrying it away in nothing more protective than a cane basket.

“The manual carrying of human feces is not a form of employment, but an injustice akin to slavery,” says Ashif Shaikh, founder of Rashtriya Garima Abhiyan, a grassroots campaign to end manual scavenging. “It is one of the most prominent forms of discrimination against Dalits, and it is central to the violation of their human rights.”

“People work as manual scavengers because their caste is expected to fulfill this role, and are typically unable to get any other work,” says Meenakshi Ganguly, South Asia director at HRW. “This practice is considered one of the worst surviving symbols of untouchability because it reinforces the social stigma that these castes are untouchable and perpetuates discrimination and social exclusion.”

But do the Muslim Hela’s indicate that the discrimination transcends caste?

A World Health Organization report in May this year said that more than a half-billion Indian citizens still defecate in the open. Using fields, rivers and abandoned lots as toilets exposes people to diseases such as polio, hepatitis A and diarrhea. One in every 10 deaths in India, the World Bank said, is due to poor sanitation, a total of around 768,000 deaths a year.

A new law has been proposed that modifies the India’s 1993 law  that criminalized scavengers. The new law would prohibit the building of non-flushing toilets that must be emptied by hand,. Anyone who employs a manual scavenger could face a one-year jail term and/or a fine of up to 50,000 rupees.

Would police enforce the law? Would it be easier to pretend the problem no longer exists?  Unless the law is enforced, greed will drive exploitation.

“Successive Indian government attempts to end caste-based cleaning of excrement have been derailed by discrimination and local complicity,” said Meenakshi Ganguly of HRW. “The government needs to get serious about putting laws banning manual scavenging into practice and assisting the affected caste communities.”

Modernising toilets will help, but as long as employers refuse to recognise that scavengers save people and governments a lot of money, they will be ignored, underpaid and exploited.

A pdf copy of the report is available at: Cleaning Human Waste: ‘Manual Scavenging,’ Caste, and Discrimination in India