Dayananda Saraswati, Mahabharata, Ramayana, Siddhartha Deb, The beautiful and the damned, The Hindu: An Alternative view 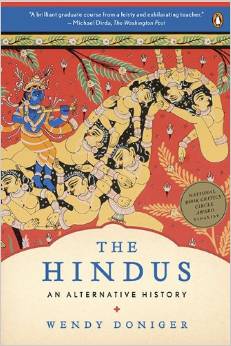 Recently I found a forum debate about the relationship between Karna and Drapaudi suspended. It was considered too controversial. I thought this odd because the Mahabharata is full of ambiguity, “dharma is subtle” it proclaims, as each character has his shadow and shining light, her aspirations and secrets.

But why? There are hundreds of recessions of the Ramayana and Mahabharata that often contradict. To some Ravan is a demon, in Sri Lanka a just king. It seems to me that the contradictions tell us something of India’s colletive psyche?

Then I remembered the reactions over Wendy Doniger’s book, The Hindus: An Alternative History

, pulped by Penguin Books rather than go through a long drawn out legal battle.

I believe the Hindu faith is strong enough to withstand criticism without having to resort to legal challengers. Legal action reveals more about the emotions of the complainants than the diverse broad spectrum of ideas expressed under the Hindu umbrella.

Indeed, as a reader of history, I realise one of the best ways to spread an idea is to ban it. (Look at Islam, now the fastest growing religion on earth, in part, I suggest, in response to  negative media publicity since 911). I know I had ignored The Hindus until I heard it was pulped.

I believe banning The Hindus reveals India’s sensitivity to Colonial attacks, more than the book itself. I also feel it reveals that the slowness of India’s judiciary is blocked by a culture of complaint.

Indian nationalism developed  British milieu that castigated sex. Hindus were effeminite and oversexed, proclaimed Britian, made weak minded by early marriage and the  British fear that Tantra and the image of Kali inspired the Independence movement. As a result Hindu reformers from Ram Mohan Roy to Dayananda Saraswati questioned what they saw as corruptions of Vedic truth which included the stories of Krishna’s amorous adventures.

For decades, Doniger has argued that sex was part of Hindu literature. The lignum as an erect penis, and that Krishna’s 160000 consorts reveal an India that Brahmin history ignored or suppressed. That Brahmins forbade a practive reveal there were people doing it.

You are welcome to believe Doniger misrepresents Hinduism. Some have even labelled her work “pornographic… Skewed and superficial”.

But many Hindu’s have argued Hinduism was corrupted. Ram Mohan Roy persuaded Britain to ban sati and Dayananda claimed the Puranas of being mostly unbelievable and false, but retaining a seed truth.

“Now the life-sketch of Krishna given in the Mahabharat is very good. His nature, attributes, character, and life-history are all like that of an apta (altruistic teacher). Nothing is written therein that would go to show that he committed any sinful act during his whole life” wrote Dayandanda in Satyartha Prakasha (Light of Truth), “but the author of the Bhagvat has attributed to him as many vices and sinful practices as he could. He has charged him falsely with the theft of milk, curd, and butter, etc., adultery with the female servant called Kubja, flirtation with other people’s wives in the Ras mandal,* and many other vices like these. After reading this account of Krishna’s life, the followers of other religions speak ill of him. Had there been no Bhagvat, great men like Krishna would not have been wrongly lowered in the estimation of the world.”

It seems the objection to Doniger is who said it.  Is it because she dares to put it all in once place?

When as  a Westerner I speak what many Indians tell me in Private, it is politically charged with an over sensitivity to past Colonial pain. …. And at times there is good reason. Many non Indians are obsessed with a sexualised misunderstanding of Tantra or Khajuraho.

For example, In Tàràpíåh, Western Tantric writer Hugh Urban “tried to question one skeptical and worldly older Aghorí about the infamous “fifth M” of Tantric practice—maithuna, or sexual union with a female partner. After my repeated prodding, he finally lost his patience and exclaimed, “All you Americans want to know about is sex. Don’t you get enough of that in your own country? Go back home to your ‘pornography’ and your ‘free love.’” On the other hand, I also met a wide range of gurus who were quite proud of their powerful esoteric knowledge and seemed more than happy to “advertise their secrets” to a well-funded Western researcher.”  The other extreme I read a Muslim blog posts that described Khajuraho as “the Playboy Mansion”.

She may have found her book banned, but Wendy Doniger rightly reminded us that Brahmin writers winged about women because there have always been those who refused to buckle under. Gargi rather immodestly challenged the wisest sage of her time. Draupadi challenged the legitimacy of her husbands selling her to slavery miraculously reclothed by those seeking to disrobe her.

Khajurahos exude mystical allure is often misrepresented in western fantasy as an ideal feminist sexual Elysium. And for those who long for the days when society seemingly applauded such ostentatious displays of erotica, Devangana Desai‘s stern rebuff: “There were double standards – men could have sex with as many women as they could afford while women were confined to their polygamous husbands. In fact, I think today’s generation growing up in cities with nightlife is much freer now.”

India has been a land of moral contradictions: of Manu’s moral stricture and Chandelas ppolygamous culture that loved the delights of women.

However, one inherent value of Hindu philosophy is the search for truth.

Of course, even Gandhi seems to have seen fit to realise at times politics requires you publicly with hold facts. (Gandhi’s hiding the name of Sheik Mehtab, a disreputable friend who nearly tempted him to partake of a prostitute was, I presume, because it would have inflamed division between Muslims and Hindus).

But for Truth to be found, all ideas must be fairly debated. Hence, I believe Penguins decision to pup the book a mistake.  Had the publishers taken the issue to the supreme court I suggest the book would have won the case on grounds of freedom of speech. Asking questions of history is not the same as deliberately provoking public outcry or causing a religious riot. 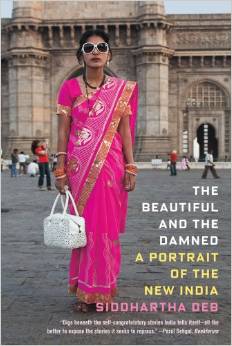 Perhaps Penguin gave up because they had been stung before.

For example, in India,  Siddhartha Deb’s The Beautiful and the Damned: A Portrait of the New India

is published without the first chapter.  ” A man who does not appear in the disputed chapter for the simple reason that I was unaware o f his existence” sought an injunction after this a chapter was published in on the first chapter the February 2011 issue of Caravan magazine.

Since cases can take a decade, it is cheaper to pulp than fight.

“There is a sad irony to the fact that a book about contemporary India, while available in full in most o f the world, appears only in partial form for Indian readers. But that in itself says something about the state o f affairs in India these days, where critiques o f the powerful and wealthy, no matter how scrupulously researched, are subject so often to intimidation. It is easy enough to find, in the media, outrageous claims by corporations and celebrities as well as their demagogic doubles, whispering in the social media about conspiracies and backroom deals. What is missing, too often, is the kind of essay or article or book that tries to make sense o f such phenomena without succumbing to their allure, and that tries, in its own way, to offer a semblance of truth.” said Deb in an introductory explanation to his book.

Of course the convenient abuse of religious sensitivity s used by all religious persuasions to get personal, social or political advantage.    Of course, I hear Musims and Hindu argue Christians would not allow criticism of Jesus. But a look at the Australian TV tells me different. Comedians regularly lampoon Jesus and the Church, at times there is outcry, that is soon forgotten.

Whether you agree with her or not,  i think it is important that female historians speak in the important debate of history.