Capitalism does not want you to stay content. That new fangled item you were sure you needed is useless and needing to be replaced.

Unfortunately the beautiful malls we thought we needed will last a lot longer. Sometimes as deteriorating concrete frames.

So why does Bhopal, with all of its small population need the biggest Mall in India? Besides DB Mall, and Ashima there is the collection of faded concrete arcades scattered everywhere.

What happened to the meditative reflection of the Ashram? There is the headlong rush of food courts, with the hype and hustle of 24-7 sales pitch. Turn on pay TV and the same add will be repeated four times in a row just to be sure you didn’t get the McPoint that you need to McPurchase McRubbish you didn’t McWant.

Chasing fame, wealth, and power can prevent us from the truth of our personal and world challenges. Addicted to more goods and a hectic life only bandages our gaping spiritual wounds and compels us to greater loneliness and unhappiness.

Of course, there is a need for development. Bhopal has developed beyond the BEMAC label. Madhya Pradesh Chief Minister Shiraj Singh Chauhan has an enviable 3 term record for getting thing done. (In a recent visit to Brisbane Australia I met a BJP official who praised him from afar).

But why rip up good farmland on Bhopal outskirts for town houses in a state that is spending money on giving infrastructure for agriculture?

Hinduism and Islam ritual respect natures rhythms. So if nature is construed as at least a little closer to the divine then surely our push for consumerism and commerce has become the architecture of evasion and deception. The unquestioned desire to consume an ever proliferating arrays of unneeded, commercial products seems a soul-defying measure of happiness that is damaging the planet.

India’s national politics has become slogan driven ideological wasteland, where cunning is praised and compassion a weakness. Politics is a cultural construction of media mirages, communal division and an ecological mess.

“The English word landscape comes from landscaef , an Anglo-German word that meant “a clearing in the forest with animals, huts, fields, fences. It was essentially a peasant landscape carved out of the original forest or weald, out of the wilderness[1]” . The English ‘land‘ means earth from the older Gothic for ‘a ploughed field’. Scape implies the shape of similar objects or shaeth , a buncle or sheath of similar plants.

Do we command ecology through the science and technologies of architecture? Landscape is certainly sublimated or modified by mans interference. But now, the ideological imperative to remake the land is losing ground to environmental fears. 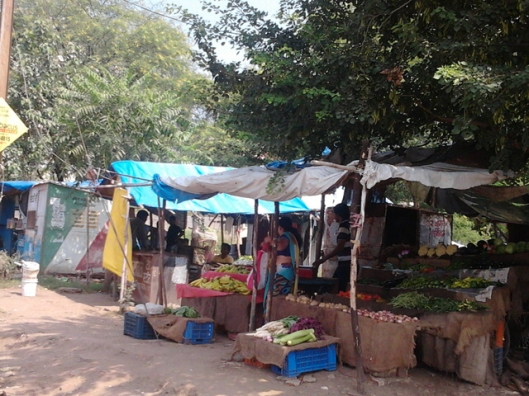 Sometimes landscapes remind you of childhood, meeting the love of your life, a concert at the Bharat Bhavan, or – heaven forbid – loss, pain and sometimes the fracture society experiences in a riot or the Bhopal’s Dow chemical disaster.

Princes, Priests and Politicians have shaped India’s landscape. But now it seems the rush to consumerism is rubbishing the scenery. In India where landscape is so often associated with linked to the gods must this also be true. The vibrant, textured colour of India has assimilated many marks of invasion.

In the village the Banyan tree is never trimmed or removed from the middle of a road. Even palaces and temples have sprawled organically without the geometric perfection of Grecian ideals that were borrowed by Islamic designers. Islam also espouses garden designs inspired by paradise.

Now, India is a secular democracy, and the issue of land use and economic progress for the poor transcends state lines. But, I hope India will not fall to the Western trap of market driven morality. Business interests tend to place profit over human life and biodiversity. 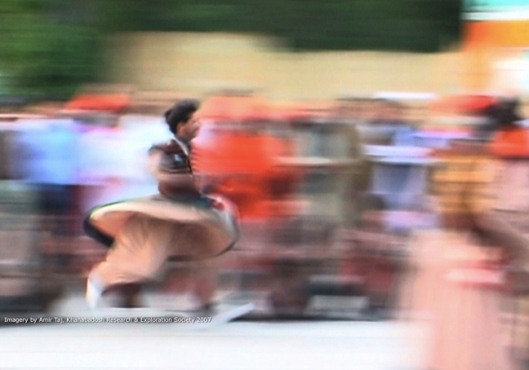 The Dervish dance of modernity

The modern world, is constantly moving described well by the word raqs.

Raqs is “the state dervishes enter when they whirl. It also means dance” wrote Elena Bernadini in Raqs Media Collective: nomadism in art practice. “In Urdu and Hindi it indicates a temporary home for travelers, a place where travellers meet, a caravansary, an inn.”

She links ‘hypermobility,’ ‘nomadology,’ ‘space-time compression,’ and ‘hybridity’ as key words for modern space. Modernity is, in Donna Haraway’s terminology[3], “about vulnerability.”

The excitement of modernity is the very cause of our vulnerability because personal and social identity is a process. Landscape is also a process, though moving much slower, offering us a psychic anchor. But even the landscape is increasingly fluid in our increasingly urban world.

It contrasts with culture as embodied genealogies of “blood, property and frontiers”. Culture “rooted societies and their members: organizations which developed, lived and died in particular places.”

While people yearn for a modernity that allows them their memories.

“The past lives on in art and memory, but it is not static: it shifts and changes as the present throws its shadow backwards. The landscape also changes, but far more slowly; it is a living link between what we were and what we have become.

This is one of the reasons why we feel such a profound and apparently disproportionate anguish when a loved landscape is altered out of recognition; we lose not only a place, but ourselves, a continuity between the shifting phases of our life.[4]”

At times the balance is lost and along with it, India’s uniqueness. The sprawling village gave us that. But cities require structure to function. Cities work when their infrastructure allows for movement and social expression.

We are torn between the masculine fixation on structure and feminine fluidity of mind and nature that resists the politics of closure, but is insatiably curious about the webs of connection.

Before the Commonwealth Games, ‘What will foreigners think?” seemed to drive a need to make Delhi a modern megacity that moved the chai wallahs to the outskirts and ignored the ‘nomadic sensibility’ still apart of Indian psyche.

If we are not careful the interconnectedness promised by technology can build a social apartheid of inclusion and exclusion. We observe national borders increasingly “thinned” and “doubled,” “multiplied” and “reduced” creating border zones, regions of residence suggests Etienne Balibar[5]. The dividing line between ‘us’ and ‘others,’ insiders and outsiders is not something which is drawn necessarily at national borders, but also within the very space of the city itself.

Cities can be both a breeding ground of natural beauty or of confrontation. A relaxed user friendly city can help keep the peace.

Bhopal is beautifully green built around a 38 hectare lake, with other smaller water bodies. But the landscape and psyche were scarred by a promised economic growth from a defunct fertilizer factory.

What have we learned? Will Bhopal will be turned from a lake garden to a beehive of prefab poorly maintained concrete? What do Bhopalis want as their cities cultural landscape?

As Ken Taylor expressed it: “The character of the landscape thus reflects the values of the people who have shaped it, and who continue to live in it. Culture itself is the shaping force. Landscape is a cultural expression that does not happen by chance but is created by design as a result of human ideologies.”

So what type of landscape of memory do we want? Heritage site give us pride, but walk outside and look. Where is the rubbish? Even if it is put properly aside more often than not rubbish collected may find its way in an empty field.

Is this the message of authenticity and integrity we want to leave for our children?