Back in Australia, the day before the Sydney Siege I was on the train to Brisbane. I was dressed in a white kurta as I was meeting Indian friends that evening. For four years I have enjoyed Hindu and Muslim hospitality and feel more comfortable in Indian rather than western clothes.

I am not – nor ever will be – a Muslim. Still, my coloured kurtas from India were in the wash so I chose the last one available: White silk. With Australia’s upgraded terrorist alert it has raised some, but rare, comment. Am I a Muslim? Or gay and wearing a dress?
Most people don’t look twice.

A woman, newly arrived to Australia soon sat opposite me with her two excited boys. She was from Pakistan happy about the order and peace of Australia, and also very concerned that people would label her a terrorist. Her husband was working in Western Queensland soon to take a new position in Tasmania.  We talked about India and Pakistan and she assured me most Pakistani’s wanted peace to simply get on with life. I spoke of Pakistani’s who I knew had lived happily in australia for twenty years. 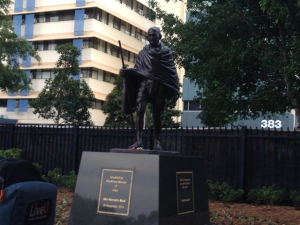 As it was the first time she had taken an Australian train, I helped her find the Roma Street Parklands were she would meet friends, I wanted to find the newly install statue of Mahatma Gandhi.

I wished her “Salaam alaikum” as I departed. “Wa Alaikum Salaam” she replied surprised.

Then of course there was the tragic siege of next day.

I am not a “bleeding heart liberal” but four years in India taught me that the narrow – at times 3 word slogan  – politics of fear rarely shows the other side of the world correctly. No society – or media – seems able to keep its audience long enough to  tell the whole truth.

So when I was told of the siege it came from a man convinced terrorism will turn governments on religion and bring on Armageddon.

“Jihadi’s have taken over a Sydney shop.  They’ ll slit some throats.“

I was not sure whether he said “they had “ or “they will”. Nor had I heard the news: I didn’t know anything. But he was smiling, abroad smile as if he were waiting for divine approval.

I felt sick: this is a tragedy.

“Did the news say they had cut people’s throats?” I asked surprising myself by my calm reaction. This well meaning man, who has extended generosity to me in hardship,  is prone to repeating the exaggeration of fellow industrial labourers.

“Well, they hung a jihadi flag  in a window”  He began to walk away a little chastened. One thing I have learned from India is stick to facts and don’t believe stories.  I have asked him only to tell me news that is backed up by evidence. I don’t listen to gossip.

“It’s nothing to be happy about” I said.

“Your smiling! It’s a tragedy.” He immediately stopped. I think a little shocked at himself. We have had a few very quiet balanced discussions since.

What is it that allows us to assume the worst of a whole group of people. The majority of the worlds billion Muslims would never think of murdering for religion, why do so many immediately assume a person in a white kurta with a beard is a terrorist? Do we label all Christians Klu Klux Clan? Have we forgotten that more people died in war last century in Christian lands than anywhere else?

I think that even if a media article is balanced, most people only look at the lead photo, headline and maybe the first sentence. Sensational headlines and photos sell papers.

We had debated this theme many times before using my neighbours Christian heritage as a starting point.  He called watching news events “staying awake”. But I keep coming back to Psalm 15 and the Sermon on the Mount. “Pray for your enemies and pray for those persecuting you”. Hating someone is the same as murder. Staying awake  seems to me to be a spiritual condition of being the person who God would want in his tent (as Psalm 15 describes it) who is blameless, righteous, “    who speaks the truth from their heart” does not slander, doesn’t wrong others, “casts no slur on others” who sticks to his vows even at a loss to himself.

While I will not describe myself in Christian terms, I recognise much of his Sermon paraphrases Rabbi  Hillel’s compassionate Judaism  The Sermon on the Mount inspired Gandhian non violence. Also, many Indians of the Advaita tradition describe Jesus as a bhakti yogi: a teacher of love propounding the essence of Sanatana dharma (divine occupation)  that precedes and is above religious form.

“Abandon all varieties of religion and just surrender unto Me. I shall deliver you from all sinful reaction. Do not fear” is how Hindi friends quote from the Gita. Christianity also says there is no fear in love.

Sadly, the Sydney siege had a tragic end that witnessed an act of heroism.  Dealing with fanaticism will require hard choices. history reminds us as economies crumble the politics of fear thrives. 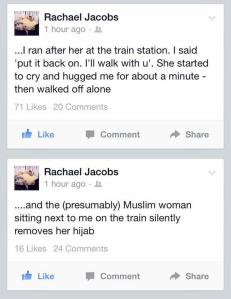 However, I was heartened by wonderful news: “Inspired by the Twitter hashtag “I’ll ride with you“, some commuters heading into the city for work on Tuesday gave their support to Muslims who might feel vulnerable amid concerns about a blowback after the hostage drama.”

My faith in Australia is restored.

As my Indian born Brisbane based friend Vikas Rana wrote on Facebook:

I am so impressed by the amazing spirit of Australians.

After the Lindt Cafe event, Australians are coming together to show their support to the Muslim Australians via ‪#‎illRidewithYou‬ that means No such events can shake us and we will NOT make hatred part of our culture !!

And that’s how it should be.

It is only the minority of Australians, (like the minority of Muslims) who give the community a bad name. Even if one radical conservative  claimed hashtag was a leftwing conspiracy to label Australians racist, the power of compassion proved the exact opposite.

That people of all faiths are basically good is the mantra the Dalai Lama has repeated for years.

Even my fundamentalist friend was impressed.

Ina few days, instead of Christmas carol’s, perhaps people should remember Jesus sermon: “Happy are the peace makers, for they will be called Son’s of God.”