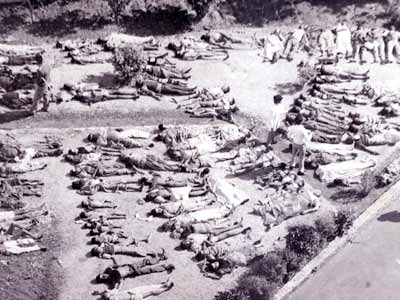 Whatever you see creates it’s echo within you, and in some deep sense you become like that which you see.”
– Osho Hidden Mysteries

For two years I avoided Union Carbide. True, when I first arrived in Bhopal the accommodation building was pointed out from the road. Another time with a Swiss tourist in the car, it was pointed out as we wizzed down new Brahmpur Bridge Road.

I had walked Bhopal’s old city before ever realising how close I was to the fenced off site.

You know it is there but no one really talks about it. Just as bodies are dissolved on a pyre, the still toxic site remains permeating Bhopal’s collective soul.

For the few protests I sense a general malaise.  Protests allow  a sense of action. They show that people can do something – a something that meant everything stayed the same.  But the eros of protest rarely brings lasting change.

In a recent visit to Australia, the Uranium sales  contract signed by Prime Ministers Modi and Abbott, inspired many Australian friends to ask me “Is it safe? Look what happened in Bhopal.”

Perhaps the legal decisions of previous governments (Both in  India and the USA) will bind Chief Minister Shivraj Singh Couhan. But I hope the upcoming 30th anniversary will be a plat form for social and business reform. The hubris of scientific progress has often been used to minimize industrial safety.  Double dealing of admitting liability in USA and not in India where some people want blood.

“The leak was caused by a series of mechanical and human errors. A portion of the safety equipment at the plant had been non-operational for four months and the rest failed. When the plant finally sounded an alarm–an hour after the toxic cloud had escaped–much of the harm had already been done.
The city health officials had not been informed of the toxicity of the chemicals used at the Union Carbide factory. There were no emergency plans or procedures in place and no knowledge of how to deal with the poisonous cloud.”

So two years later I find myself crossing the crumbling damp earth to a painted brick fence . Behind the white blocks  that encircle the site shantis are leaning. Washing hangs from branches into the property.

The monsoon is past but the sun has already left a sting on my face and exposed hands. The soil is soaked and rutted, wet and crumbled.

On a chalky patch of white a sitting  sari-d woman is pounding  the ground. Nearby three naked youths pull themselves from a long concrete water tank near bye. Towelled and dressed, they offer (more like foce me) to take my picture for piase, money.

There is a clear breach in the wall, half filled in by layered rocks.

But I feel an intruder. The world needs to experience Bhopal and to learn from this disaster. The thought of Toxic tourism feels an unwelcome intrusion. And tourists do have a reputation of destroying the landscape and  solemnity of the places they wish to see.
The terms ecotourism or cultural tourism seem oxymorons. Tourists are seen as culturally ignorant, Tourism often changes the very thing come to see. Frustrated sceptics feel justified in describing Social Justice tourism as “self righteous arrogance”, “hypocritical” and “ironic”.

But I am not a tourist. I rent on the other side of town.

I am not seeking to satisfy morbid curiosity. People ask me about the disaster as if I should know as the 30th anniversary approached.

Emails to MPtourism and anyone else I can think of have been ignored.  One website claims permission can be granted in 24 hours, but no organisation matching the claim was found.  I approached the police at the Collectorate Office. I am given an address but that’s a dead end too.

Talk of tours has upset some locals, but one of my Bowen Therapy clients, a former UC employee is frustrated there is so much myth and exaggeration about the disaster in the hope of making money. I am not so sure.

I had followed my nose past the Taj ul Masjid without a map, bought an icecream opposite the Chingari Rehabilitation Clinic  and knowing I must be close recognised the fence line almost by accident.

I understand, the locals expressed concern about opening the site to tourists for the 30th anniversary.

However we spend more on tourism than on eating, so disliking tourists is a bit like disliking who we are who we have become our culture and who we stand for.

It’s like resigning to what is and saying we can never do better.

Bhopal is sadly the premier example for Toxic Tourism.  India and the world have not learned the lessons. In US toxic “human sacrifice zones” shock even locals by the nearness to homes playgrounds and schools.

I do not wish to discredit the beauty of Bhopal or to make a clown of human suffering.

I do want people to see what is hidden and denied. A life worlds apart that is right next door.

But If Duponte can creatively advertise “better living through chemistry” or GE claim “We bring the good life” why is it wrong to use creativity to remind people of hidden and denied toxicity? World over, such tours reveal how close toxic industries are to residents

Bhopal is a beautiful city. This is the beauty I want people to see. Yet to inspire change, perhaps we need to evoke the ugly sensibilities of our world.

An appearance rust and brick like any other forgotten factory is before me.

Amongst the rusted frames, life is mixed with death and new growth. Greenery isa graphic symbol of renewal in a scarred and contaminated landscape. I sense life from death.

But unlike Hiroshima or the Twin towers there is no iconography of memory. Yes, outside ruth watermans memorial captures despair but is barely noticed. Some laugh at it: “What is that supposed to mean?”

In 2011 The Urban Rhizome Photo project rebelliously showed that may Bhopali’s do not want to be defined by the tragedy.  This shadow boxing with the past reminds us that environmental disasters carry a universal burden.  Bhopal may have been a local tragedy but intricate links question our entire global society.

Union Carbide may be a local phenomenon but it’s response must be global.  Landscapes are not just rock and tree scapes but memories evinced from our past. Healing is therefore an ongoing and constant renegotiation of individual and collective meaning we as a society give to this tragedy.

Unfortunately, the survivors have become an ongoing subjects in the collective experiment of industrial failures.

Images haunt. There is a whole mythology built on this fact: Cezanne painting till his eyes bled, Wordsworth wandering the Lake Country hills in an impassioned daze. … ‘It is like being alive twice.’ Images are not quite ideas, they are stiller than that, with less implication outside themselves. And they are not myth, they do not have that explanatory power; they are nearer to pure story. Nor are they always metaphors; they do not say this is that, they say this is. … Some feeling in the arrest of the image that what perishes and what lasts forever have been brought into conjunction, and accompanying that sensation is a feeling of release from the self. …Only the moment is eternal.”
—“Images,” an essay in Twentieth Century Pleasures (Ecco, 1984) by Robert Hass

As I look at the green shrubbery pushing through rust and concrete I am reminded that India is a land of images.:Images that link us to its myths.

How will the night of the gas be remembered? How can we explain the larger implications of industrialisation?

More than just words are required. In Tantra it is taught that we enhance our senses and evoke our inner mantra. So what emotive experience  -what feeling – could move people to action? There are so many conflicting memories to interpret and rehabilitate.

How do we recognise contemporary needs with conflicting painful past and remember  Bhopal’s beautiful palaces and not just a disaster?

What legacy will lesson balance public memory with the marginalised, equity with ecology? 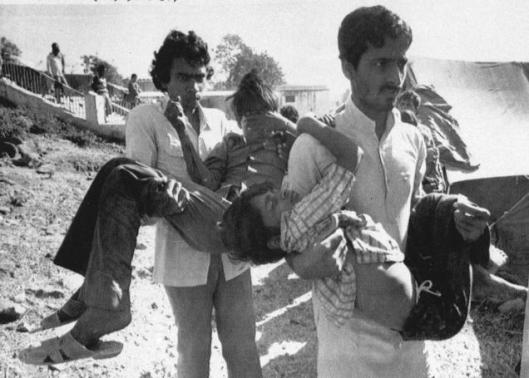 The images of this mantra of death are as tactile as a poem that brings up the sensations of the past and present. But it is too easy to see life like fragments of ghazzals rather than appreciate the beauty – or pain – of the poem.

The recent movie recreation “Bhopal: a prayer for rain” has again projected history across the movie screen of the mind.

But in the silence of metal and concrete I hear a mantra in my mind.   Mantras  reminds us of the power of silence and reflection and meaning and how, like life, springs from the humus of death.

Bhopal must mean something for the world or the rusting hulk will become just an industrial product another. It’s mantra must be of  industry, ecology and decontamination.

As I left I turned down the main road. The front gate to Union Carbide land was wide open.

It is up to us to determine by what songs  future generations will remember December 1984. 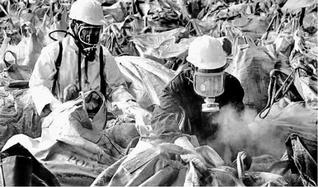 3 thoughts on “The day I walked into Union Carbide ….”