Passing the Shaukat Mahal, I am seeking the tomb of Bhopals founder, Dost Mohommad Khan.
The Shaukat Mahal across from the Iqbhal Playground, where budding cricketers in white qurta and knitted skullcaps practice. Post Renaissance and Gothic, it’s design blends occident and orient in a style conceived and designed by a decadent Frenchman who claims decent from the French Bourbon Dynasty.
Next door, the entrance of the Sheesh Mahal seems more parking lot for cars Sadar Manzil Gate.

The delicate beauty of the past now houses the Bhopal Municipal Corporation.A fountain past the entrance catches my attention as I ask a a guard for directions. They invite me in for a look. I am saddened that nearby Taj Mahal is a closed deteriorating shell while this beautiful building is a business hub that few tourists can be entered within to experience.

However, my goal is slightly farther, within the campus of Gandhi Medical College, besides the tomb of Dost Mohammad Khan and his wife Fateh Bibi . I am even more interested finding on the campus the worlds smallest mosque. 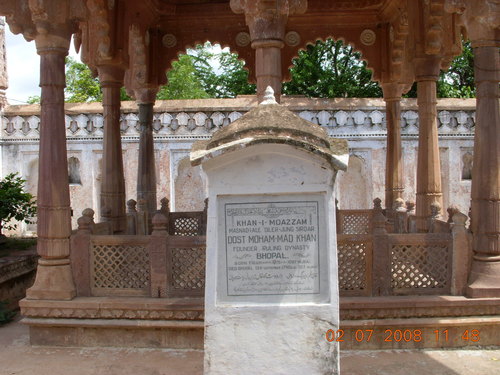 Panoramia.com I was not permitted to photograph inside the mosque tomb

the tomb of Dost Mohammad Khan and his wife Fateh Bibi

I quickly found the asjid Dost Mohammmad Khan as I wound past  a temple and mosque inside the entrance. Within to the side are the tombs.

I had first to negotiate a barrage of personal questions. “Foreigner? Which country””Mai Bhopal main rahta hai), and offering profuse assurances I would not photograph inside the mosque or tomb, I was checked several times to ensure I did not take photos within.

Built by son Yaar Mohammad Khan in the year 1742 the tomb sits on a raised square platform, the tomb is surrounded by a 3 metre  high wall with corner minars and three entrances.

Eight arched pillars support a dome, which typical of the early Bhopal rulers, is not proportionate. Beautifully, amalgam horse shoe and lotus shaped brackets  in between the pillars are proportionately balanced multifoil arches. Lattice marble screen surround the tomb.

Dost Mohammad Khan was a complex man. Brutal in conflict, he enlisted under Mir Fazlullah, Emperor Aurangzeb’s Keeper of Arm and led forces during in the final brutal years of collapsing Mughal rule.  A risk taker, who broke military conventions, often at great risk to his own life.

However, he had earlier learned to appreciate culture when he fled Afghanistan after he killed a man in self defence. In Delhi, There he met his old  Mullah Jamali of Kashgar. For a year, Khan studied Quran and witnessed the culture and  tolerant ideals of Shah’s Akhbar and Jehan.

A mercenary during the wars of Mughal Succession, he married Kunwar Sardar Bai, who later converted to Islam and adopted the name Fatah Bibi and established a small mustajiri (rented estate) near Mangalgarh, called Berasia.

Khan was invited by Bhopali Ghond Queen Rani Kamlapati to revenge her husbands death. Bhopals upper lake was then inhabited by around 1000 Gond and Bhil tribals.,and Khan usurped her kingdom then invited her to join his harem. She refused, choosing suicide.

He decided to fortify the town with a wall with six gates and built Bhopal’s first, and the worlds smallest, mosque so fort guards could perform namaaz.

The fortified city of called Sher-e-khas enclosed 1.5 sq kilometre by a wall 10m high 2 to 3 m thick included  hammams, with windowless chambers for public bathing,  hathi khannas to house elephants and their mahaots , serias to house  travelling merchants, and mosques. Buildings, three or four floors high, enclosed narrow streets, a few 4 metres wide at the most,  matched each other as children played on pattias or raised platforms to sit out the front of a house.

Ironically, after chai with my new – still inquisitive – friends, they did not know where the worlds smallest mosque was! Overhearing, another man pointed me a few hunnded metres around the bend.

Dhai Seedhi Ki Masjid, the Mosque of two and a half steps

“Er …. where is it?” was my first reaction, reading the sign, sadly aware that unable to find the watchman I would not see inside. The padlocked gate also prevented me from climbing the steps.

Dhai Seedi Ki Masjid sits atop a watchtower, at one of the cities highest points it offers a commanding view of a city built in turbulent times. Initially a makeshift mosque for the prayer of the guards,  the mosque of 2 and a half steps was built during the construction of Fatehgarh fort begun by  Dost Mohammad Khan. 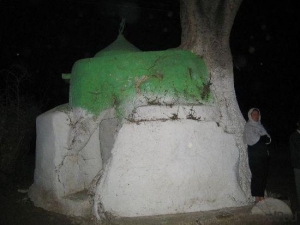 In Harar it is claimed the smallest mosque is in a tree!!

For me, the Dhai Seedhi ki Masjid, built for the defenders of Fatehgarh Fort, is a reminded that we have a spiritual yearning that needs to be answered even when defending our kingdom.

As I wandered the grounds hoping for a better a photographic angle, I found this more worldly reminder of the modern world. 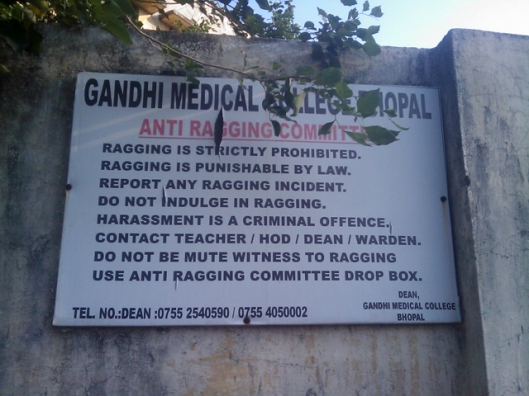 Yes, we must live in this modern world. First we must transform ourselves if we are to transform the planet. After visiting the Mosque, I found that Lonely Planet had made the same trek with better success finding the watchman.
Hence, complements of lonely Planet I present the inside of the Dhai Seedhi Ki Masjid. 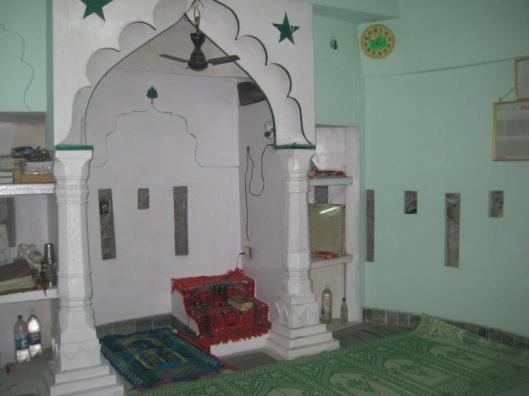 The mosque was perched on top of an overgrown stone turret, which formed a corner of an old ruined fortress wall. The hospital, it turns out, was built inside the grounds of the 18th century Fatehgarh Fort, so that soldiers deployed as guards could perform their daily prayers. And, according to an old city tourism sign standing outside the locked gates, this was the first mosque built in Bhopal, a city that now boasts more than 400.
– Loney Planet