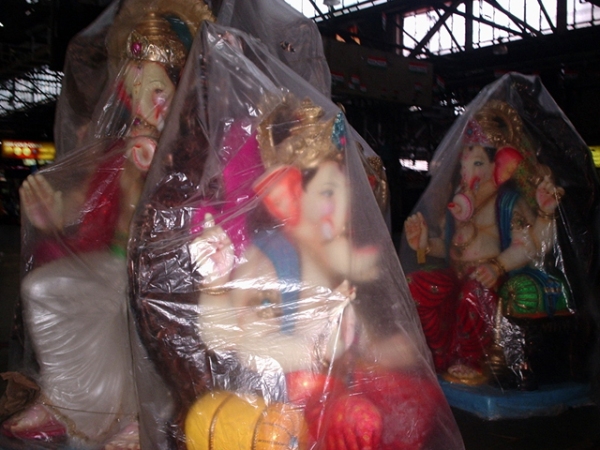 When I first visited a Garnesh temple,  my accent nearly led me to trouble. Someone, unused to my Australian drawl, was convinced I had called the divinity a garnish. Fortunately, an Indian friend came quick to my rescue, smothered ruffled feathers and suggested I not attempt any divine pronunciations.

A few years later, in Mumbai, the preparation for Ganipati, the 11 day festival for Ganesh was madly underway. Back in Bhopal, there seemed to be more idol makers visible than in Pune. The festivities seemed to be more open but less pontificated. In Pimpri, trucks publicly paraded the divinity. While I am sure it is found in Bhopal, the emphasis in my area of Sector 8 is communal, with even the slums communally sharing together much like a westerner may share Christmas. 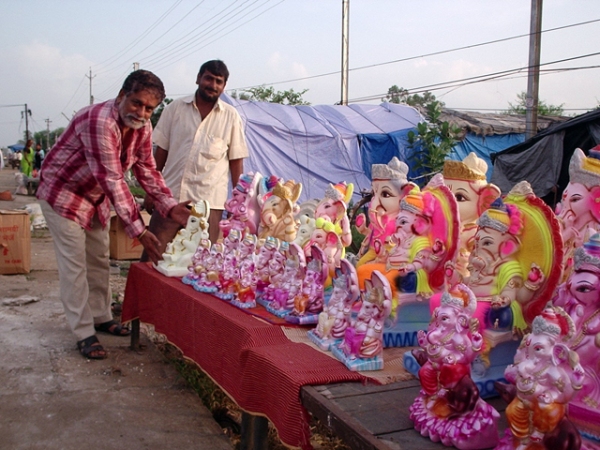 In walking distance from home here, I was reminded of a Christian story of Paul upsetting the silversmiths  Ephesus worried that their business may be threatened by what they considered a strange idea of a one God philosophy. I imagined my Christian relatives cringing as   as the street manufacturers off flower pots turning their trade into god makers. 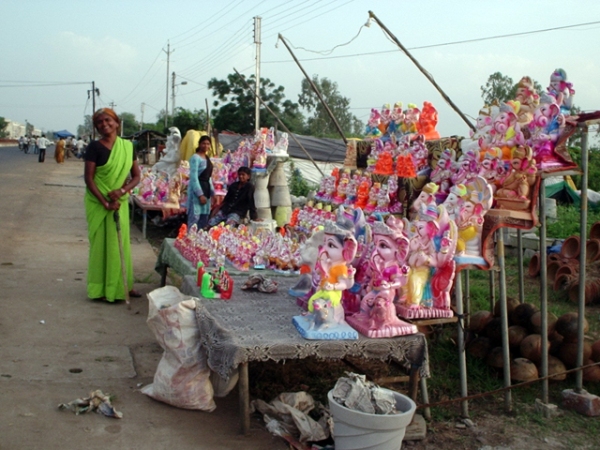 However, I needed to understand the story, and since Hindu teacher Sri Sri Ravishankar had spoken at my daughters Pimpri school, I serched his archives to find if I could make sense of the festival.

According to Sri Sri, Ganesha is called is the formless Divinity who for the benefit of the devotee is encapsulated in symbolic form.

“Though Ganesha is worshiped as the elephant-headed God, the form (swaroop) is just to bring out the formless (parabrahmaroopa). He is, ‘AjamNirvikalpamNiraakaaramekam.’ This means Ganesha is Ajam (unborn), he is Nirvikalpa (attributeless), he is Niraakaar (formless) and he symbolizes the consciousness which is omnipresent.

For 11 Days the streets are glowing 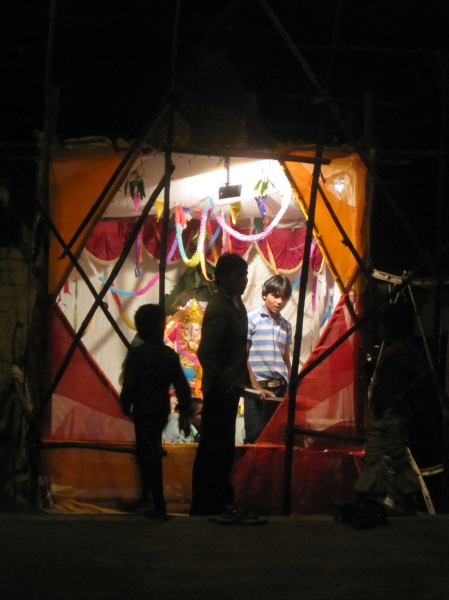 Parvati became dirty when she was celebrating with Shiva. When she realized this, she removed the dirt from her body and created a boy out of it. She then asked him to keep guard while she bathed.
When Shiva returned, the boy did not recognize him and obstructed his passage. So Shiva chopped off the boy’s head and entered.
Parvatiwas shocked when she saw this. She explained to Shiva that the boy was their son and pleaded with Shiva to save him at all costs.
Shiva then instructed his helpers to go and get the head of someone who was sleeping with their head pointing to the north. The helpers then got the head of an elephant, which Shiva affixed to the boy’s body. 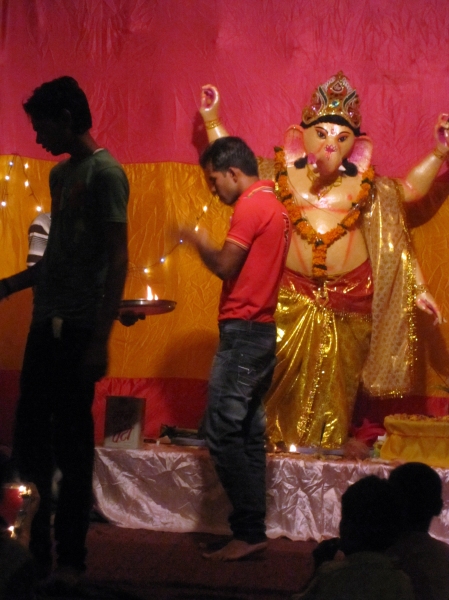 Hindu’s have described this to me as a fiction of symbolic importance. Why would “all knowing” Shiva not recognise his son? Would Shiva, “the epitome of peace”, so short-tempered that he cut off the head of his own son?

According to Sri SriRavishankar  “Parvatiis symbolic of festive energy. Her becoming dirty signifies that celebration can easily become Rajasik, or feverish and can take you away from your center. Dirt is symbolic of ignorance, and Shiva is symbolic of the Supreme Innocence, Peace and Knowledge. So when Ganeshaobstructs the path of Shiva, this means that ignorance, which is an attribute of the head, does not recognize knowledge. Then knowledge has to overcome ignorance. This is the symbolism behind Shiva chopping off the boy’s head.

Elephants are symbols of wisdom and effortlessness. 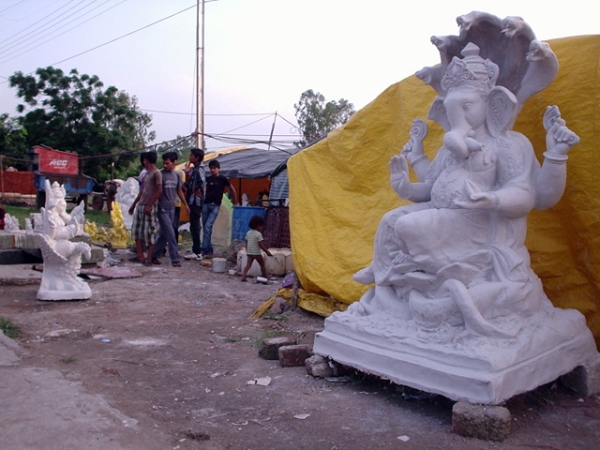 Ganesh is depicted with a generous belly, one hand raised protectively, the other lowered in endless giving.  Ganesha also has a single tusk which signifies one-pointedness. The items he holds are also symbolic: the ‘Ankusa’ (signifying awakening) and the ‘Paasa’ (signifying control).  “With awakening, a lot of energy is released, which without proper control, can go haywire” claims Sri Sri.

Ganesha is shown riding a mouse.

“The mouse snips and nibbles away at ropes that bind. The mouse is like the mantra which can cut through sheaths and sheaths of ignorance, leading to the ultimate knowledge represented by Ganesha.”

Most endearing is the communal meal binding shared by all. There is also some commercialisation. One animal farm for kids reminded me more of a Mickey Mouse rather than the symbol so eloquently described by Sri Sri. The same gripe is made of other traditions world over.

Again, I hear the voices of Jewish and Christian friends. For sacrificed to idols are a Halachic no -no. Christianity seems split: Acts 15 says “abstain” from  them yet later Paul writes of Christians eating meat at a temple, since idols are really nothing from his perspective, but he wont if it stumbles someone.

At least kindness is being offered to the community.

The finale is a mass immersion of the idols which are increasingly biodegradable . A festivity I missed.  However, Navratri is coming, business is booming and for my community at D. K. Devsthali the joy of sharing will again fill the air., 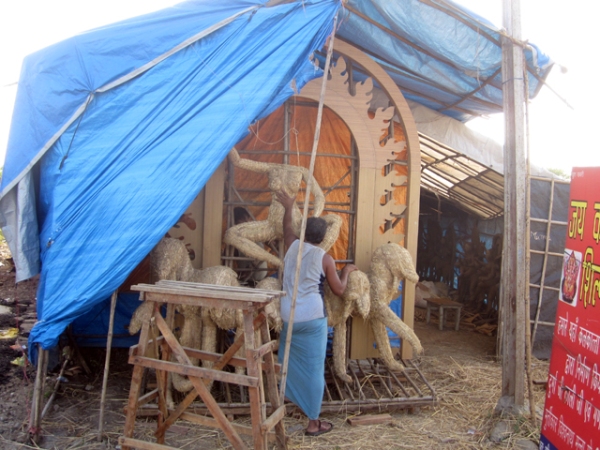