When people hear the name Bhopal they think of “the night of gas”. They do not realise a rich history of environmentally sensitive and sustainable architecture precedes the disaster for nearly a millennium.

Since the disaster, a former employee assures me, India has had to import fertilizer. But Bhopal’s agricultural heritage predates the malfunction and sabotage of a fertilizer factory.

Sprawled across 20 to 25 kilometres of the Vindhya and Singarcholi mountains, the City of Lakes, has a beautiful green cityscape built around the Bara Talab (Big Lake) commonly called the Upper Lake. A millennium on 11th century Raja Bhoja’s Dam still holds back 35 sq km of water but many other ruins dot the city uncared for. 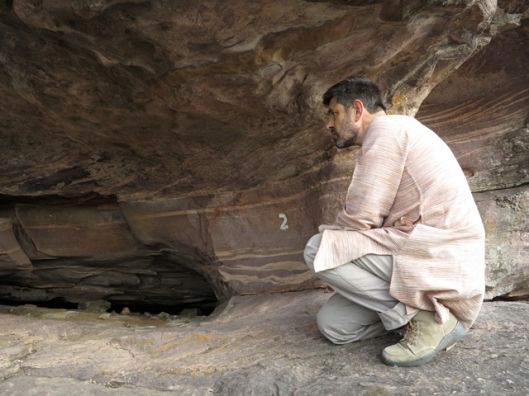 Prehistoric man wandered Lalghatti and Dhrampuri and rock paintings are preserved in the Shamla Hills. However, it was during the reign of Raja Bhoj (1010-1053) the fortified grid iron city of Bhojapala guarded the east of Bara Talab. A sister city of Bhojpur, with its magnificent unfinished Bhojeshwar temple, was built east of an enormous lake 650 sq. Km of Bhima Kund and Sagar Taul. By utilizing natural terrain only three dams were required. At Sagar Taul two small gaps were required to be filled.   A 90 metre long, 14 metre high wal, 90 metres wide earthen dam with huge sandstone blocks with a flat top stood until 1334 CE.

The undammed Betwa besides Bhojpur

The local Gond tribes claim it took three months for the men of Hoshang Shah to cut through the dam and three years for it to empty. For thirty years the swampy lake bed was uninhabitable and villages downstream of the Betwa destroyed.

Now the once prosperous Bhojpur is remembered only by the incomplete temple and the huge scattered dam masonry.

Nearby, Bhopal’s 11th century settlement is also layered with history. Ravaged in the 13th century, a decayed village by the 17th century. In 1722 Dost Mohammad Khan, a mercenary, was invited to assist the local Gond queen Kalmapati, annexed the Bhopal Taul.   Rani K amlapati suicided rather than be forced into Khan’s harem. 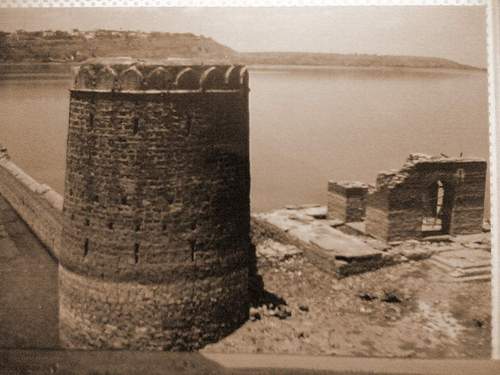 Khan built city ramparts near the older settlement, establishing the citadel of Fatehgarh on the highest plateau of the lake. It remained the administrative centre to the early to mid 19th century. Part is now used by Kasturba Gandhi Medical College that includes the world’s smallest mosque.

The fortified city of Bhopal was called Sher-e-Khas and enclosed 1.5 sq. Km in a 10 metre wall, 2-3 metres thick and 1.2 kilometres in length. Taxes probably paid for elaborate infrastructure that included

The narrow streets, the widest being four metres, were sided with buildings to three or four floors. The outside platforms, or pattias, had matching designs where people met and gossiped. An akhara, or gymnasium included mud pits and fitness training equipment.

The city was extended by Pul Pukhtra in 1794 when a 274 metre long and 21 metre wide masonry dam spanned the Ban Ganga and Patra valleys that formed the Chhota Talab, or small lake. A vassal state to the Nizam and then the Mahattas, little building followed until Mamola Bai, one of Bhopal’s history of ruling women, insightfully gave General Goddard of Britain shelter in Raisen fort as he battled his way across India and ensured a protective treaty with the British East India Company.

Another female ruler, Qudsia Begum, built the Jami Masjid with its golden minarets between 1833 to 1856. Then in 1847 the Moti Mahal (Pearl Palace) was begun by Sikandar Jehan Begum as an administrative centre and residence, creating a new urban centre on large plateau north of the Gohar Mahal. Although the Khirniwala Maidan complex took 50 years it’s has a unified design elements including parapets, uniform wall height and plinths with French influence. In 1848 Sikandar Begum then commissioned engineer David Cook to develop the lake front that included a waterworks. 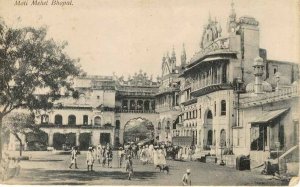 A red sandstone boali or step wall of Bara Bagh is 3 stories deep, two above the water level, lead into a step-well was built by Nawab Wazir Mohammed Khan and later conserved by Nawab Qudsia Begum.

Inside are ornamental structures that surrounded the well, colonnade with cusp arches and slender pillars. Niches decorate the wall along the entrances of the boali built around 1819. Bhopal’s inter-connected lakes began with the building of a new suburb by Nawab Shah Jahan Begum called Shahjehanabad in 1874. An Idgah was constructed on the highest point, and three new terraced lakes constructed, now separated by a road. Water from one cascaded into the next forming the suburbs central area. Complete with bazaars, galla mandies, or grain markets, store houses, serais, and a residential quarter Shahjehanabad was enclosed by a city wall.

An aqueduct still visible at Chhota Talab, pulled water up 15 metres by leather bags, or chawars, into channels that flowed down an arched slope. The chawars raised the well water with animal strength and the water flowed 1.75 kilometres to a pond at Noor Bagh where Afghan troops were stationed.

However, the three lakes were dependent on seasonal rains.

To balance water levels a reservoir was built north of Shahjehanabad with elaborate brick-lined vaulted drains that collected and bought water to the lakes. Transformed into splashing fountains and gurgling cascades, and silent chadars (sheets of water), these channels passed through important buildings along the way. Legend claims rose water or kewda was added to cool and freshen the air.

To this day ground water is recharged year round in the Bhopal’s old city. The boali reduce water loss in a locality known for high evaporation.

Over a century, Asia’s largest mosque, the Taj-ul-Masjid, was built and nearby, across from the Motia Talab, the H-shaped Benazir Palace in 1875. Made of steel columns with louvered wooden partitions, extensively carved hammam, the Benazir Palace cleverly control the temperature. A summer palace, it is enclosed with terraced gardens and fountains its steps and plinths descend into the lake like a ghat. Its ornamental gate, the most ornate in the city, was added later. This has multi-foliate arched openings and stair cases leading to chhatris, or domed kiosks, with pitched eaves.

The Colonial influence of high ceilings and raised plinths was more marked after 1901. The newer public buildings include Revenue courts, Minto Hall, Court of Justice, Civil Club, and the Hamidia Katubh Khana, or library.

Many of the gates are deteriorating. Locals speak of their city still beautiful in the 1970’s. The wall that enclosed the old city was partly removed to allow for a oad and access to the Hamadia hospital. The land Minto Hall has been leased out by the MP government  and will be demolished. The Munshi Hussaini Talab sadly looks like a rubbish dump.

There are exceptions. Bhopal’s Tribal Museum has a green roof, the Correea designed Bharat Bhavan shows a Hindu sensitivity for nature, and Madhya Pradesh Legislative Assembly, or Vidhan Sabha is influenced by nearby Buddhist stupa’s of Sanchi. However, the step-wells of Bhopal and majority of the lakes constructed by the cities noble rulers have since decayed. The Baoli has been forgotten and lakes have been encroached.

But now, after walking the Union Carbide site, and enjoynig the connected series of lakes by the Taj us Masjid, I am sitting the smallest, Munshi Hussaini Talab. A local family kindly offers me chai. By the mosque an old man clasped my hand warmly. Hindu”s had paraded floats and hoses for Navratri. I still find old city charm and hospitality.

For a  useful resource is checkout

Dass, Meera. “City with a past – an account of the built heritage of Bhopal.” In Bhopal 2011: Landscapes of Memory, edited by Amritha Ballal and Jan af Geijerstam, 80-84. New Delhi, India: SpaceMatters with Norwegian University of Science and Technology (NTNU), 2011.