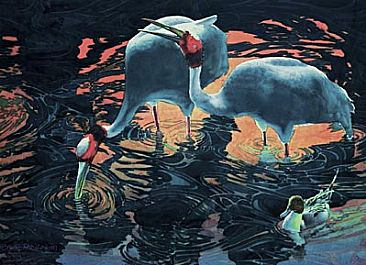 … or ponderings at waking at dawn

Imagine if instead of being woken by the dawn, you have the power to wake up the sun. I do not mean that birds wake up the dawn. But to wake from the night of doubt in preparation for the dawn.

Prayer IS meaningful. Prayer is not empty. Prayer can anchor us to sublime feelings and take us from the doubt that conflicts us with our body.

In NLP we anchor change to powerful intense passions. Prayer is more subtle and sublime.

In sin we are torn from our mother and judged by our father. So follow your heart and expect miracles.

We cannot serve the commandments of the Upper One if we do not know what the creator needs. Inversely, a man cannot serve his wife if she hasn’t told him her desires.

“The dawn does not awaken me, I awaken the dawn” say the kabbalists. It does not mean birds wake up the sun, but in the night of our deeper doubts we prepare for the dawn of a new life.

“We should fight” with Gandhian new age intentions not fight elsewhere in blame of “it’s your fault” with masculine combativeness alone but feminine nurture together, as lovers.

Joined in the middle to find peace within.

We must have a conviction beyond our life. Like Churchill who was convinced he would not die until he finished his World War II mission. I do not encourage the ecstatic religious fervour that leads to violence. Rather the honourable belief that you are here for a reason.

It may seem that life is a smashed vase or an urn. To contain all our possibilities we have to piece it back together. It is like Persephone living with the Lord of death, so she can return and blossom in spring.

For true prayer is not words. Of course, there is great power in personal and communal prayer. The scientist Herbert Benson who described the relaxation response, also discovered its effect is amplified using the chants and prayers of faith over meaningless syllables.

Yes, prayer can offer physical and communal change, but prayer is like incense. Its scent has upper, middle and lower “notes” sensed differently by each individual.

In the Chassidic text Tanya I am reminded of an intrinsic link between spiritual and physical, between the religious world and the body. This not need magic in the sense of controlling the spirits, but alchemy a religion that is socially unifying whereas magic is personally self centred, it is often apart from organised culture.

In Inani Tibb healing may accompany reading averse from the Quran, or even the drinking of water that has washed a Quranic text.

Similarly some Jews recite the Zohar. Chassidism links the spiritual body to the positive and negative commands of Torah, using them to heal.

As above, so below is repeated in the psychosocial healings of Marsilio Ficini, Pico Delqua, Miandola, Paracelsus and John Dee labelled in an arbitrary doctrine of signatures.

Then the Reformation separated the spiritual and physical.

I suggest the breach will be healed more scientifically and by the meanings we give to symbols in our new world. They work by shifting our world view or the messaging triggers of symbolic categories in our unconscious. They trigger child birth ritual ink symbolically to even the Sharman’s chant. Trigger a cultural meaning.
Where earth and land is the “kingdom of heaven”; the emblem of the creator

Then we like the prodigal son who returns, (“return when we find ourselves”, as the Sufi’s say), and discover that darkness was our opportunity to realise our deeper truth.