From a distance the Holy Samadh of the Radha Soami Satsang lacks the aura of the Taj Mahal. Look closely and you will be spell bound. Its Intricate exquisite carving is shaped with mind of a mystic or poet.

It may take another twenty five or even a century to complete. Workers have spent entire life there. There are no whirring machines or bellowing overseer to hurry them. Upon the gurus request, the same family of artisans have worked there for generations.

What matters is the deep mindful attention to their work, where time or the world no longer matters.

It fits no traditional style and is expected to use 9,900 cubic metres of marble. fine pietra dura inlay details the inner walls. The 33 metre high memorial unifies the tenets of many faiths by combining temple, gurudwara, vihara and mosque. Personally, I could only describe intense adulation for the intricate rose carved onto pillars the feeling of subdued solemnity upon entering.

I was immediately struck by the intricate detail at the entrance and the use of coloured flowers similar to the work of the Taj Mahal. However, I was unsure how to describe the design, annoying my Muslim and Hindu companions as I tried to decide if the arches were Gothic? Roman style? They did not have Indian descriptors either.

The Radha Soami is a describes itself as a philosophic organisation considered by devotees a true way to God realisation: a Sant Mart, or path of saints.

The word ‘Radhasoami’ combines ‘Radha’ ( the soul or spiritual essence) and ‘Soami’ (spiritual master;swami); and refers to the “Lord of the Soul” or God. It also can be interpreted to mean the “Master Soul” or “Spirit Master” who guides the disciple to higher states of consciousness.

The faith requires allprinciples must be accepted only if supported by natural laws and facts. Stress on actual realisation based on personal experience or intuition. Listening to inner sound through mantra or simran is essential for spiritual advancement,, combined with personal loyalty to a living Master. 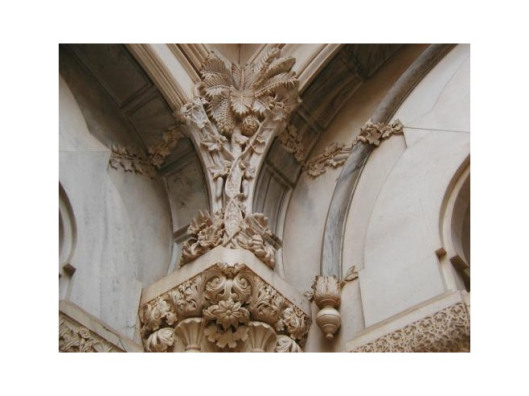 I purchased a number of the groups books and as outsider it seems the Radha Soami encourages religious tolerance, and merges ideas from Hinduism, Christianity, Sikhism and Buddhism.

The founder Soamiji Maharaj died (or took samadhi) on June 15 1878. It was the the 3rd guru Pandit Brakm Shankar Mishra, called “Hazur Maharaj” or Maharaj Saheb 1861-1907) who suggested a monument.

Architect Frizoni of Italian architectural firm prepared design started in 1904. Is that why I thought of European descriptions for the arches?

The 2nd guru, (or the 2nd Preceptor of the Radhasoami Faith) Rai Saheb Saligram, had put Soamiji Maharaj ashes in a casket in the exact place he used to give his lecture and a bhajan hall was built around it. Saheb had been the first Indian to hold the post of India’s Post master general.

In 1911 (during 4th guru Madhav Prasad Sinha) a more detailed blueprint was visualised by the Indian engineer Lala Tola Ram.

Members of the faith believe that Radhasoami is the real name of the supreme creator given himself.

He manifested himself in 1818 Agra in Shiv Dayal Singh whose sanctity drew people to him founded faith in 1861. He wrote 5 volumes of practical devotional methods of the sants,or Soar Bachan.

There is no caste and unlike patriarchal societies, when the 3rd guru Padit Brahm Shankar Misra  died in 1907 he was succeeded by his sister Buaji Saheba who died in 1913.

Reference: During my visit pictures within the memorial were forbidden. Internal pictures of the Satsang are courtesy of the blog Where’s My Backyard Stories , a blog dedicated to the stories of many with Alzheimer’s. The linked post describes a tour of the Rhada Soami Satsang.