A man set out on a long journey, but his wife did not want him to go. So she asked the local guru how she might hasten his return. “Make him promise” said the guru, “to sleep every night under a tamarind tree on the outward journey, and to lodge beneath a neem tree every night on the way home.” The man kept his promise. But tamarind trees exude toxic vapours (or so it is claimed) and make you feel ill; while neem trees are restorative. So the farther the man travelled, the worse he felt; and as he got nearer to home again he felt better and better.

-ColinTudge The Tree – a natural history of what they are, how they live and why they matter, 2005, Tree Rivers Press, New York.

“[sleeping under or near trees] is not that much danger, but you will feel body pain. If you sleep under a Tamarind tree, you will feel such a heavy pain. Since the villagers of south India know about this truth, they always avoid to sleep under big trees unless there is a good wind flow through-out.”

I remember the first time I ever saw a tamarind tree. I was in Pune, visiting the Empress Gardens. With an agility of half his age, an old gardener surried onto a shed roof to throw fresh tamarind fruit into our waiting hands. It is one of my favourite Pune memories, eating fresh the fruit I had only used as a paste in cooking. Yet, I now know there are deeper about the Tamarind. 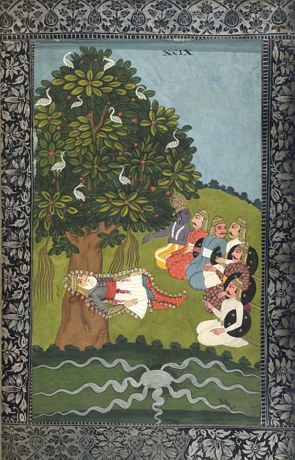 The ancient In Sanskrit texts call tamarind the tintrini tree. According to legend, it is connected with Parvati’s daughter Usha. In her honour, tamarind replaces salt in the month of Chet.

In north India, tamarind is commonly called asimli, and Imli-tala (shade of the imli) and is sacred to Krishna. Considered an incarnation of Vishnu, Krishna with Radha personifies ideal love. When apart from Radha, it is said Krishna sat under a tamarind tree where he experienced her spirit permeating him. Later the 15th century saint and reformer Chaitanya, who some believe is an incarnation of Krishna, also meditated upon Krishna seated under a tamarind tree.

The Ghosts of Night

However, the tamarind has a more haunting reputation from evening. At night, the evergreen leaflets fold, and are believed to be haunted. Perhaps this is because it’s acid content eaves the ground barren of other foliage. People avoid it at night, and believe sleeping under it causes pain.

The strong, subtle and wind resistant tree is grown in the precincts of temples to the Mother Goddess who it is believed fights evil spirits at night. People avoid walking near tamarind trees in the dark. 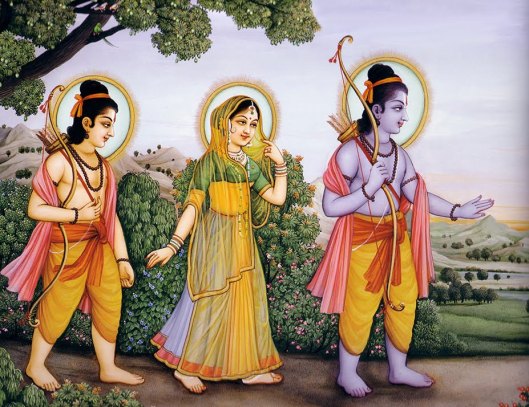 Tamarind leaves are many of tiny and delicate leaflets, and they make a beautiful tracery against the sky. There are many myths to explain its feathery foliage. For example, the leaves were split by arrows shot by Lakshmana, according to the Hindu epic Ramayana.

Shri Rama, Lakshmana and Sita had vowed to live as sannyasin in exile from Ayodhya for fourteen years. Clothed in garments of bark, they lived on stream water, and the roots and berries of the forest.

They had vowed to sleep upon no bed but green grass and fallen leaves and under no roof save that of the sky.

One night, as they slept under a tamarind tree. a great storm arose, howling like raging demon. But under the tamarind tree, they slept peacefully, since the rain could not reach them through the thick leafy roof overhead.

A crash of thunder woke Shri Rama who realized that, although the storm raged, under the tamarind tree they were as sheltered as in a house. So Rama woke his brother concerned that they were breaking their vow not to take shelter.

However, Rama had no heart to wake beautiful Sita sleeping peacefully.

‘She is asleep; I have no heart to wake her up. what can we do, my brother? If we remain here, we shall break our vow. And if we move, we must take her with us.’

‘My brother,’ he said. ‘I know a way.’ And rising, he took his bow and with carful aim he shot his powerful arrows upwards at the thick leafy roof overhead.

The arrows of Lakshmana went one by one through each tamarind leaves shattering them into a thousand tiny leaflets and the rain poured through them so that the ascetics were no longer sheltered sheltered and fulfilled their vow.