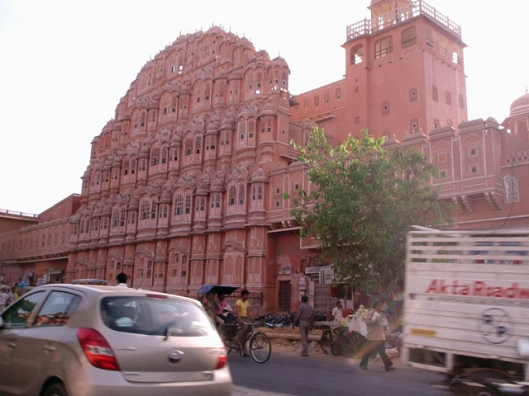 Visiting the Pink City of Jaipur, I am struck by the five story pink and red and stone 1799 Hawa Mahal or Palace of Winds. With 953 small jharokhas or covered windows, it was designed in an  era of defence in war, privacy  was paramount, especially for women in purdah who could see the outside world.

But the intricate open work carvings  did shield the sun or allow unseen eavesdropping for gossip or political intrigue. The 16th Century poetry in stone known as jali would catch the breeze using principles found in modern air-conditioning, offering both security and circulation.

Jali became the grammar of Mughal and Rajput architecture, from India’s north east, to the simple homes of mud and bamboo; from stone haveli’s or Kerala’s grand homes or from the heat of Rajasthan, Delhi and Agra

Poetry in stone would soon be placed in windows, door wells, stairwells, roof gablets, and balconies to allow a room to breathe. Like a second skin a few feet from a structures walls.

Scientifically by breaking a windows total aperture into tiny openings the jali acts as an overhang. If the openings are the same size as the materials thickness it acts as a louver, protective of glare and direct sunlight.

The size can vary.

The large jali in Mughal Delhi, differs from the small squares of intricate shapes in Agra. The proportion of holes was larger and the overall percentage of opacity lower in the humid climates like Kerala and Konkan differing tothe designs of Rajasthan and Gujarat.

Two laws of physics turn jali  into air-conditioners: the principles of Venturi and Bernouli.

Venturis principal states that air is compressed and increases its speed when passed through a funnel causing a breeze.

Bounoulis law states that when air is compressed and released it becomes cool.

Jali has been made from materials as diverse as mud, marble, wood, brick, metal and more recently cement. Still, the play of shadows enhance ambience intricate patterns: stars or honeycomb, flowering arabesques and floral forms. 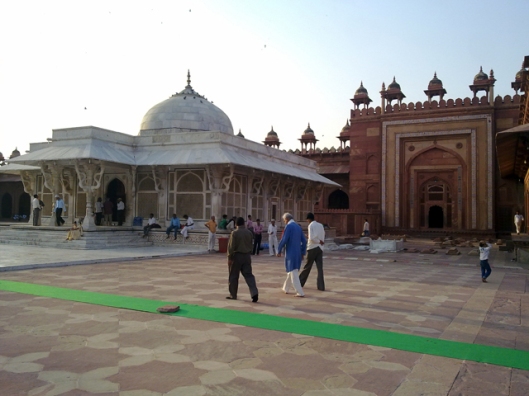 The jali screens of the tomb of Salim Christi

A few days later, I am standing by the tomb of Salim Christi, in Akhbar’s former capital city Fatepur Sikri.

Sadly tour guides have spoiled the mood, trying to sell me a kurta for 5000 rupee to raise funds for the  the madrassa. I am promised the saint  will be reward me the “desires of your heart.”

As a Muslim friend rescues me, I watch the faithful tie coloured threads the panels. They are humbly praying or a boon.

It is forty eight degrees centigrade. Yet, far from just a screen from the heat and  glare, I am reminded  jali offers  passage of that subtle join between public and private, and perhaps between earthly and divine.