Injured during Raahgiri Day!! A frisbie thrown with all the power of youth connected with the bridge of my nose at close range.  Just a minor cut – but t was funny. The poor little grill looked a little uncertian, the father quickly smiled reassuringly as did I . But boy it hurt!

Never mind, festivals should be fun. They are great for sponsors, educational and even an inspiration.

Good festivals rise from the community and express the scale depth and gravity of shared experience: from artists and communities mainstream and minority.

India loves it’s vast community spirit. A vibrant spirit, which occasionally can suffocate individual expression. In the close of parks we can sing nd dance together, while simultaneously expressing our uniqueness.

Raahgiri Day reminds us that cities are more than structures. They are living , breathing organisms of whole communities working and playing together.

Raahgiri day promotes good health in a uniquely Indian way. It groves up the music and engages the senses with dance, meditation, yoga, storytelling friends old and new jostling and friction of bodies  It  offer us alternative food experiences.

The ideas behind the festival – celebration, identity, community – usually remain free-floating concepts given life by the shard but different perspectives of different groups. Festivals can be the bridges through which we connect to each other. Again and again, and in ever-evolving ways.

But sometimes a festival is not about connecting or reaching out, but turning inward in some sense. For example, worldwide Diwali attracts people neither Indian or Asian. Yet the festival provides a public face for a community as well as a focal point for organizing community resources and energies. This in itself builds community; even if it is based away from its Indic home.

When I first I first saw street poster I neither knew what to expect or that it was a weekly event. I  saw another dated a week earlier, guessed I must have made a mistake.

I soon discovered that Bhopal, like Gurgeon before it, is determined to get people out of cars and evxercising on the streets. Delightfully, the whole atmosphere charged the city blessed with so much greenery.

Cauldering off a section of road for a No Vehicle Sunday to promote exercise and eco-friendly living gives fellow pedestrians (raahgir) somewhere safe to walk.  But not a sedentary walk, Vishal fitness Plant turned the street into an outdoor gym, writhing to the crowd to Bollywood rhythms,

When I first visited Raahgiri Day in Bhopal, in October the theme was Clean India-Green India. Saplings were offered to plant and people could donate old clothes and toys as Diwali gifts for the under privileged. The local government promoted new projects and environmentally friendly cab pooling, or safety messages.

The name ‘Raahgiri Day’ has been coined using two words, ‘Raah’  and ‘Giri.’ ‘Raah’  means a path to reach a goal, and ‘Giri’ comes from ‘Gandhigiri,’ which is a colloquial expression popularised by the 2006 Hindi film, Lage Raho Munna Bhai,   to refer to the tenets of Gandhism.

The idea started in 1976, Bogata Columbia. Ciclovia or closing specific streets to automobiles exclusively for cyclists and pedestrians changed the lives residents of 2 million residents then spread internationally.

First the very Indian Raahgiri Day took off from Gurgeon. Every Sunday, for a fixed time period, a street or road is kept closed for all motor transport then opened exclusively for walking, jogging, cycling, skating, and exercising. In Bhopal a 2 kilometer stretch is closed off from the Van Vihar National Park (Bhopal zoo) past the the Boat Club to the Bharat Bhavan. 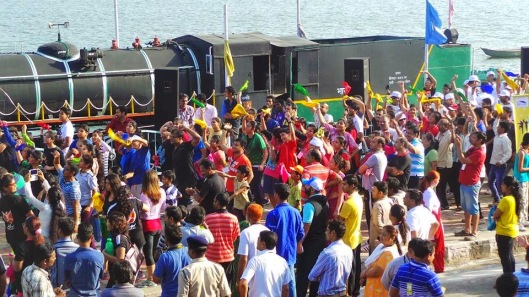 More than just exercise, Rahgiri Day showcases conservation and innovation. It was awarded the Parivartan Sustainability Leadership Awards 2014 by Sustainability Outlook. In Bhopal I know many who hurt by the Bhopal disaster proudly support organic alternatives.  It also allows local government to ensure community messages are seen by the public.

Raahgiri day reveals our need for a vibrant life that dances in good health, community and individuality. 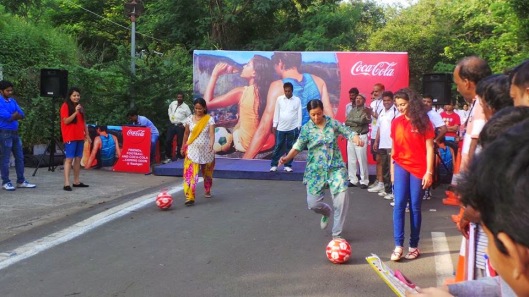 Aussie doc gets Raahgiri therapy, is how the newspaper described me.

Yes I made The Times of India, but I’m not a doctor.

“He read about it and took a morning BRTS bus to reach location. Brain Sullivan is a Bowen therapist (a hands-on therapy to heal pains, where a practitioner uses thumbs and fingers to gently move muscles and tissues). “It is quite an experience. Hustle bustle of chaotic traffic often gets to me. This is fun and a joy altogether,” he said.”

(Hustle and bustle? I never use those words: I did say I was surprised by the level of obesity in Bhopal compared to other paces I had lived in, so exercise was good. I did lament the traffic, however I came by bus, but not the BRTS bus route). I simply enjoyed the local art student’s work as they explored a typical Raahgiri Sunday.

Raahgiri Day is a wonderful relief.

I love cycling and walking but my first bike ride after arriving in India saw y back wheel bent by an impatient driver.

Every year 1.5 lakh die in Indian traffic accidents:, 20% in towns and cities of which 70% are cyclists and pedestrians. About 6 lac people die annually on account of air pollution and transportation accounts for 1/4th of these pollutants  Another 4 lakh die o lifestyle diseases caused by a sedentary lifestyle.

The founders of Raahgiri day realized 5000 Gurgoan people, primarily cyclists and pedestrians die. Rather than hope to peruade the authorities to act, they made a change themselves. Beginning on Novemeber 17, 2013, over 300,000 people joined in forcing the original 4.5 kilometre route to expand to 22 kilometres in 22 weeks. 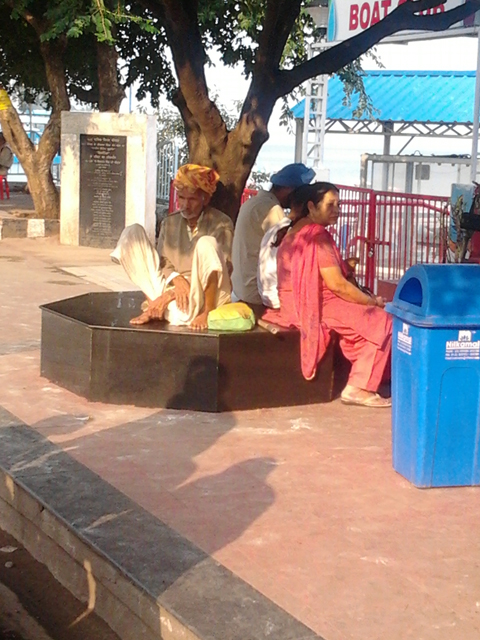 I admit I am sceptical of India’s Bourgeoisie  Environmentalism:  It may see charity in helping the poor, but screeches to stop when you are asked to quit your car and use a bus: Buses are seen for the  common folk. Money still means wasteful and polluting entitlement for the rising middle class.

The lesson? Give people the infra structure and people will walk or cycle.

Hopefully, the same good results can spread across a new Clean and Green India.

About time! Finally the government agrees passengers should wear a seat belt.